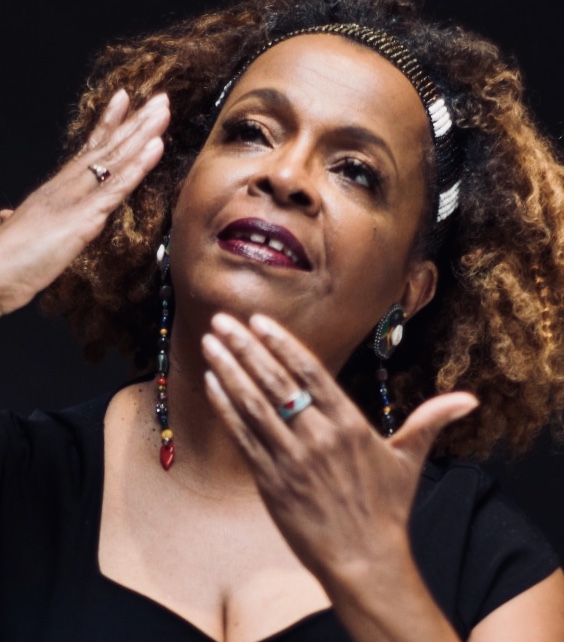 Barbara is honored to follow in the footsteps of Dr. Shirley Childress Johnson, who interpreted Sweet Honey performances for over 35 years. Both women shared strong Deaf community ties through the Silent Mission of Shiloh Baptist Church in Washington, DC.

Barbara was introduced to sign language and the Deaf community while taking a Harry Poe drama workshop with the late actor Charlie Brown, a black male CODA and D’Bora Ware, a young black, deaf, female artist. Sign language classes taught by Eric Malzkuhn, Bob Seremeth, and Mark Goldfarb followed. After graduating from Catholic University (where she met SHIR member Carol Maillard), she worked in the box office and participated in several workshops at the DC Black Repertory Company in Washington, DC. She made the life changing decision to learn American Sign Language and later become an interpreter, so she started working at Kendall Elementary School for the Deaf. She went on to earn her MA in Deaf Education and teach Deaf and Hard of Hearing adults and children at Gallaudet University and the DC Public and Loudoun County Public school systems.

She has interpreted plays at Arena Stage, the Folger Shakespearean Theater, Baltimore Center Stage, and the JAW Festival in Portland Oregon. She interpreted both stage productions of ”The Lion King” at the Kennedy Center and was a member of the first, Black, Deaf stage company, ”I Didn’t Hear that Color”. She has interpreted and coordinated interpreting services for the National Black Deaf Advocates, Amercian Asociation for the Advancement of Science, DC Mental Health Services – St. Elizabeth’s Chapel and the annual production of The Messiah at Shiloh Baptist Church. She is proud to be a founding member of The National Alliance of Black Interpreters DC Chapter. She wishes to express deep appreciation to God for a loving family who has supported her new career.