Art Steele has pursued parallel interests in personal musical performance and concert audio technologies since 1968 in Berkshire County, Massachusetts. He moved to the Pioneer Valley area in 1970, and while attending and working at the University of Massachusetts, founded and managed “Steele Sound Reinforcement Rental,” and  as guitarist/ vocalist, fronted the award-winning regional blues band, Southside. He was able to meet and work with many of the blues, jazz, and gospel artists whose recordings had influenced and formed the core of his own performances.  This duality of focus and livelihood has continued through the years with his events production company Audio Promedia – responsible for technical support solutions for over 200 events per year; and his current group “Shake It on Down” which released it’s fifth CD  Live at Theodore’s in 2006.

During the 1970s while working as a technical consultant in the New England area, Art met and worked with Sweet Honey in the
Rock- first in 1978 at UMASS, then yearly at Smith and
Amherst Colleges. 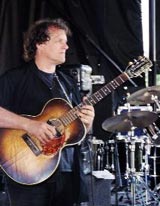 Early in the 1980s, Art was invited  to work as sound engineer for  the annual Sweet Honey anniversary concerts, and as a consultant to the Sisterfire festivals, both in Washington, D.C.  In 1982, Art started on the road full-time as Sweet Honey’s touring sound engineer In more than 25 years, he has missed only three shows – one airplane flight cancellation and two injuries requiring surgery. He is the Cal Ripken, Jr. of sound engineering! 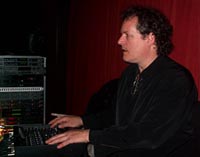 Art at the Board

Art’s personal motto is “Who dares, wins.”  His Audio Promedia company motto is “Unique Purpose-built Production Solutions.” After more than thirty-five years he continues in the work to which he has dedicated most of his life – to mate the technology he loves with the music he loves in the hearts, minds, and ears of the people he loves.

In his musings about working with Sweet Honey in We Who Believe In Freedom: Sweet Honey In The Rock…Still On The Journey, Art revealed his philosophy on good sound.

Sound is not a “hard” science but an art rationalized by “hard” science. When mixing a cappella sound I keep in mind that I am delivering art to the audience; it must be done artistically. The room is a cup to fill with sound completely, but without spilling a drop. If you attempt to “overfill” this cup, the room will speak and you might not like what it says. …Sound as processed by the brain is nonlinear and very subjective. I therefore considereach audience member equally an “expert,” and weigh the inputs and observations of nontechnicians heavily. Voices should live as 3-D images in the room, not as sounds violently spit from the speaker. (293)